Can anyone please confirm for me the tracking parameters for Outbrain? Is what I have in the attached image correct?

Also, is S2S postback possible with Outbrain? I am using voluum as my tracker. Thank you!

this is their tokens : ClickPapa Tokens - TrackingTokens.com .
just verify that and you are ready to go.

and about Postback just see there platform if they support that you will see it.

and if you are using a tracker i don't see any good reason to use their platform to track, you are just giving the data to the traffic source i don't like that at all.

@Ryan Bartman I have tried to confirm it using Outbrain's documentation, but all I found in their KB is this article on UTM tracking (https://www.outbrain.com/help/advertisers/utm-tracking/).

One of VLM customers has this set up and all the data are sent to Voluum (confirmed by our Account Manager). These tokens are a little bit different from those listed, maybe it will help you:

When it comes to origsrcid and origsrcname - Outbrain doesn't list them in their doc so I can't say for sure if they are right or not.

I've seen some comments that Outbrain does offer a S2S postback. It's for mobile app tracking normally but can be used for any product/campaign (https://www.outbrain.com/help/advertisers/server-app-integrations/#postback).
They also support a javascript pixel. If you can add Outbrain's conversion pixel to your Thank you page, it will fire conversions back to OB (https://www.outbrain.com/help/advertisers/multiple-conversions/).
R

affiliate
Thanks tyoussef and also Karolina for the help! Yea Outbrain's documentation is pretty vague regarding the passback tokens - both Taboola and RevContent are quite clear on the other hand. Thank you though for the screenshot and verification. I will set mine up like that.

As for the S2S postback I've decided to not use it anyways because like tyoussef said there's no benefit to it really in this case.

Thanks again for the help!

affiliate
The complete list of outbrain parameters can be found here.
We have a direct integration with Outbrain, so postback is preset in our backend to fire when you activate the integration.
@tyoussef - there are many reasons to track conversions. One is to obviously track your campaign performances, but the other reason, which is sometimes overlooked, is to enable campaign optimization within the ad network/ traffic source. A good example for that, is Google Ads, which uses the conversion data to optimize your campaign according to your target CPA and also to adjust your quality score. 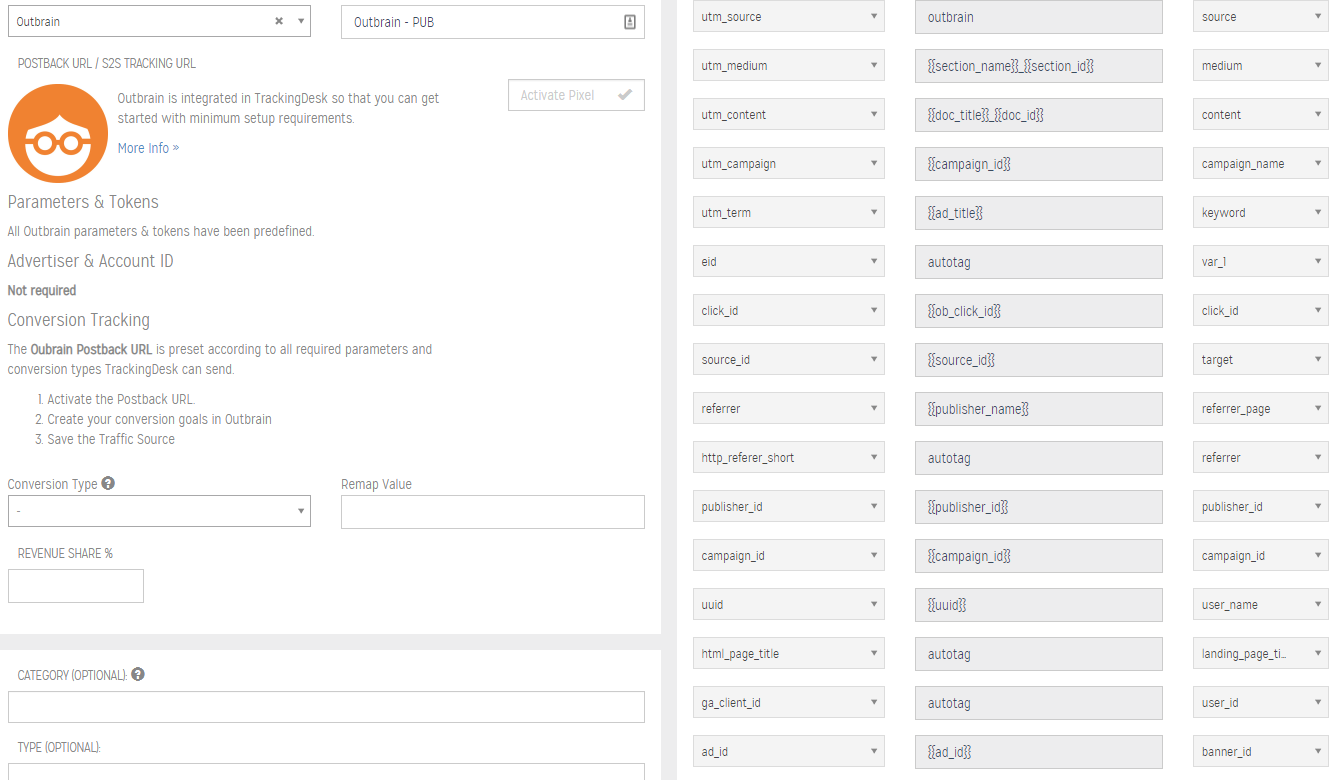 trackingdesk said:
@tyoussef - there are many reasons to track conversions. One is to obviously track your campaign performances, but the other reason, which is sometimes overlooked, is to enable campaign optimization within the ad network/ traffic source. A good example for that, is Google Ads, which uses the conversion data to optimize your campaign according to your target CPA and also to adjust your quality score.
Click to expand...

yes @trackingdesk I agree and I know this, but never give the real data to the traffic source, even for Facebook now some affiliates don't send the real conversion value, they use plugins in their stores to do that. if they know you are winning too much they will raise the CPC .
some of the traffic sources they do this For sure.

and for these traffic sources of push and pop they don't optimize your campaign based on the data you send them, all they want is sell you all of their traffic, they don't even like the idea of whitelisting, they hate it, they want to sell the whole traffic.

affiliate
values can be some numeric hash

affiliate
@tyoussef this could be a never ending debate
I would perhaps agree when talking about 2 or 3rd tier ad networks, but billion dollar companies would take a huge liability risk by playing by those dirty games, as you only need a single wistle blower for the empire to collapse.
Also, keep in mind that it's a game of supply and demand which automatically adjusts pricing according to a huge number of advertisers bidding for the same ad impressions, each according to a set of parameters, rules, conditions, budgets, etc....
Yet, what you're saying is right. They want to sell you the entire traffic, regardless if you make money or not. But by the same token, advertisers have budget limits and cpc caps. So if the ad network raises the prices to level that will not produce a prositive ROAS, advertisers will put their budget somewhere else.

Again, supply and demand. No matter who you are, what budget you have and what your goals are, these rules will always apply to all parties involved in the bidding war.
The publisher, the ad network, the advertiser.

If i follow your thoughts, when looking up at the thread and seeing that @Ryan Bartman runs his ads through volum, would you also tell him not to track his conversions in his tracker? Since volum/codewise/zeropark are the same companies, wouldn't it be counter productive to disclose your entire marketing funnel as well as all possible campaign attributes and performances to a company that could potentially tag all the traffic in order to feed it's audiences and sell more traffic or use such traffic for its own benefits?

Here again, i doubt the guys at codewise would dare playing such a dirty game against those who feed them. They are also subject to the same supply/demand rules, and would also take a huge risk by doing this.

Every participant in the digital marketing ecosystem is subject to the same duties, rights, supply and demand.
Take facebook for example. they thought they could sell our private data to third parties. they went from 218 to 123 in less than 6 months... that's the perfect example that everyone can pay the heavy price by playing dirty games.

affiliate
But Zuckerberg thought he could get away with it -- didn't he?
You have to understand how shaving, skimming and slippage works.
It's like a dripping faucet.
1% on $10 million a month is $100K that goes into the bottom line (or someone else's pocket ) EVERY MONTH! Even at 0.10%, and surly unnoticed, it pays for a penthouse apartment.

Imagine a class action that would claim 10% of the money spent by all advertisers on google ads, for the past 5 years...

affiliate
Never prove it in court -- the perf knows this -- petty larceny on a grand scale.

innocent error -- no criminal wrong doing is what the affirmative defense is -- you see this all the time -- not surprising at all.
EPC is what matters --that is the only way to spot it (probably). Or, better Net EPC
Last edited: Mar 1, 2019

@trackingdesk, i don't want to talk if the traffic sources are good or bad guys, but all I can say is that personally I don't trust, and I know data worth money, and i will never give my real data to any traffic source out there, even if it uses my data to optimize the campaign i gave the false conversion value, i never give the real thing.

That makes me confortable at the end of the day.
Share:
Facebook Twitter Reddit Pinterest Tumblr WhatsApp Email Share Link
Top
Attention: "role based name" email prefixes such as support, webmaster, info, contact, forum, service, affiliate, admin, traffic, partners, marketing, etc., for our member accounts are not permitted. They are acceptable for a vendor listing, but not for the member email. This is due to bulk email processors scrubbing them for delivery due to extremely high bounce rates. Please apply for membership using a personalized email prefix. Something like bob@xxxxx.com. If we discover you signed up with a role based name we will give you only one message to change it. After 3 days your account will be removed if the email is not changed.
Continue